He returned to the area again in 1807 with his sister Dorothy to spend some time with the Marshall family in Kirkstall. During a stopover in Wharfedale on their way home, Dorothy and William visited Bolton Abbey and Barden Tower, from where they walked up the river Wharfe to Burnsall, then over the moors to revisit Malham Cove and Gordale Scar.
On returning home to Grasmere after this visit to Wharfedale in 1807 Wordsworth wrote The Force of Prayer a poem which tells the Story of William de Romilly, the boy of Egremont who, as legend has it, died in a vain attempt to jump the Strid at Bolton Abbey. As he attempted to jump the gorge, with his dog on a lead, a leap which they had made on many previous occasions, the greyhound held back and pulled the boy into the water where he drowned. In the poem Wordsworth describes how the boy’s mother Lady Alice de Romilly, who owned the site of Bolton Priory, gave the land in memory of her son to the Augustinian canons who built the priory there. 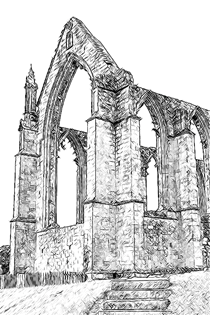 It was this same visit to Wharfedale that inspired Wordsworth’s narrative poem The White Doe of Rylstone.
He weaves two legends into the tapestry of the poem which gives an account of The Fate of the Nortons, a wealthy catholic family living at Rylstone Hall. In1569 they were dispossessed of their lands (attained) and charged with treason after their part in a disastrous attempt to re-establish the catholic religion and free Mary Queen of Scots from her imprisonment. Thomas Norton and his nephew Christopher were executed for their part in the rising of the north, and a second nephew Francis was slain by Royalist soldiers.
The poem recounts the legend of the White Doe which made a weekly journey from Rylstone Hall, the home of the Norton family, across the fells to Bolton Abbey to visit the grave of the Norton’s only daughter the fictitious Emily. In life, the White Doe was her constant and devoted companion, following her everywhere.
Emily was a regular visitor to Bolton Priory in the company of the Doe, Wordsworth wrote of her walks on Rylstone Fell and to Norton Tower, the ruins of which can still be seen high above the valley, on the edge of the fell.
Nor lacked she Reason's firmest power;
But with the White Doe at her side
Up would she climb to Norton Tower,
And thence look round her far and wide
I have always valued the poetry of William Wordsworth; if as you walk the crest of a broad ridge in the Lake District or hike down a picturesque valley, you start to recite a piece of poetry inside your head, I cannot think of a better travel companion than Wordsworth.
Mick Melvin