Map required Outdoor Leisure 1 The Peak District (Dark Peak Area)
Old Glossop to Higher Shelf Stones Circular
Details of the aircraft wrecks obtained from "Dark Peak Aircraft Wrecks" Ron Collier.
Walks starts at the eastern end of Shepley Street in Old Glossop:
This walk which is mostly over rough moorland will take you to three aircraft wrecks, including possibly the most well known and visited wreck in the Dark Peak area, the Superfortress "Over Exposed" which crashed here in 1948 killing the 13 members of the crew. Make your way to the turning area at the eastern end of Shepley Street in Old Glossop, there you will find parking for about six cars. Start out up the wide farm track with the beck on your right hand side, passing the bunkhouse on your left, in just under half a mile you come to a gate and a ladder stile over the wall on the left. Take the stile and ascend the grassy track rising steeply up the moor, cross another ladder stile and shortly after a step stile over a wire fence onto the open moor. Follow the edge of the steep escarpment until you come to a dilapidated fence, which you follow upstream until the rocky bed of Yellowslacks brook rises up to meet you at a 5 foot high waterfall. The stream bed rises less steeply now and after 100 yards you come to another 5 foot waterfall, just passed this waterfall you can cross the bed of the stream on some flat slabs and climb steeply up the other side onto the moor above.

You now should be on the 540-metre contour, which you follow around the hill in a southerly direction until you meet a feint path coming up from Wigan Clough on your right. Keeping above some low Crags follow the edge of the Moor, and just before the edge drops away and turns northeasterly, you should come across the wreckage and a low stone memorial set into the hillside nearby.

Lancaster KB993
In the early evening of 18th May 1945, Lancaster EQ-U with Flying Officer Anthony Arthur Clifford at the controls took off from Linton-on-Ouse. 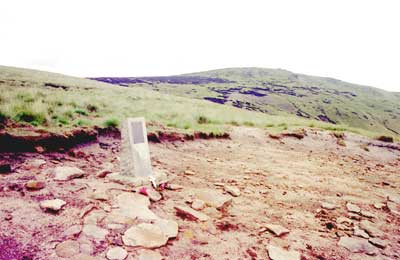 It appears that the crew, bored with flying round practising landings and take-offs, with no fixed exercise, had decided to go for a circular tour. Darkness must have caught them out of sight of base and lost over the Derbyshire hills, the bomber struck the top of James's Thorn hill and burst into a ball of flame. All the crew of six perished in the crash, although the rear gunner lived for a short while. Leave the wreck site in a southerly direction descending on a steep grassy path until you reach a fence which you follow to the left (East) for a 100 yards, this fence leads directly to the next wreck.

C-47 Skytrain
The crash was found two days later at 5 o'clock in the afternoon when Sergeant Pridgeon, an RAF cypher clerk, and his girl friend came upon the wreckage of a Skytrain whilst out walking. He knew of the Lancaster bomber that had crashed at some point on the mountaintop they were on, just nine weeks earlier, and he thought that he had come across the scene of the Lancaster bomber wreck. It was only when he came upon the dead bodies of the crew that he realized that he had come across a new crash scene.

It appears that the Skytrain hit the high ground, when the hills were shrouded in low cloud as they so often are. When I was at the site in May 2003 there was a plastic Memorial plaque, which was placed there during 2002 by the brother and sister in law of the co-pilot First Lieutenant Earl W. Burns, Glen and Elsie Burns when they visited the site both aged 69 years. Unfortunately this plaque has now disappeared, probably due to high winds. To continue the walk, follow a grassy path which contours in a Northeasterly direction along the base of James's Thorn, until you arrive at the saddle between James's Thorn and Lower Shelf Stones, where you pick up a path which crosses the peat haggs and heads in the direction of Lower Shelf Stones. From Lower Shelf Stones walk along the top of the crags until you reach the trig point on Higher Shelf Stones. At the trig point set your compass to 60 degrees and keep walking for about 250 yards, when you will come over a low hill and find the wreckage of the Superfortress scattered about the clough before you.

Superfortress B 29
It was only a twenty five minute trip for a B-29 from Scampton in Lincolnshire to Burtonwood USAF base near >Warrington, when the pilot Captain Landon P. Tanner took off on the morning of 3rd November 1948, at around 10.15. His crew for the trip consisting of co-pilot, Captain Harry Stroud; engineer, Technical Sergeant Ralph Fields; navigator, Sergeant Charles Wilbanks; Radio Operator, Staff Sergeant Gene A. Gartner; Radar Operator, David D. Moore; Camera Crew,Technical Sergeant Saul R. Banks, Sergeant Donald R. Abrogast, Sergeant Robert I. Doyle and Private First Class William M. Burrows. Two other crew members were Corporal M. Franssen and Corporal George Ingram. Acting as photographic advisor was Captain Howard Keel of the 4201st. When Over Exposed failed to arrive at Burtonwood an air search was initiated and during that early wintery afternoon blazing wreckage was spotted high on the moors near Higher Shelf Stones. 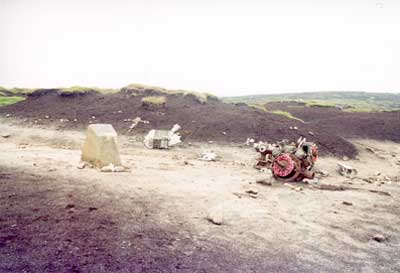 By chance members of the Harpur Hill RAF Mountain Rescue Unit were just finishing an exercise two and a half miles away, so they quickly made their way to the scene of the crash. Several bodies lay scattered around the blazing twisted metal, it was obvious that there was nothing that they could do for them. How to get the bodies off the moor was the next problem that they had to face. Because of the rough terrain it was suggested that rather than carry the stretchers three miles across the moors to the Snake Pass Road, they would call in helicopters.

However, the rescue men volunteered to attempt the job themselves. Six men to a stretcher they set off down the moorland with others taking turns to carry the grim loads. The bodies were taken on to Burtonwood Air Force Base, which at that period served as a servicing depot for American aircraft engaged in the Berlin airlift, the crew of 13 men had all perished.

From the wreck site cross the moor to the Hern Stones which are a solitary group of rocks rising prominently from the peat haggs North of the site. At the stones turn South East down the stream bed, and within 200 yards you will be on the Pennine Way which you follow south and then south westerly to the junction with the Doctor's gate path. Your route now descends this impressive valley and follows the line of a Roman road along Doctor's gate, to arrive back at your starting point in Old Glossop.