The walk starts near to the head of Howden Reservoir, at the turning circle on the west side (NGR 167939). Begin by going through the gate, which bars traffic from going further up the reservoir, and follow the stony but easy track to the bridge at the head of the lake, at the spot called Slippery Stones. Cross over the bridge onto the Yorkshire side and immediately turn left (north) This 17th century packhorse bridge once stood in Derwent village before it was flooded with the construction of the Ladybower Reservoir, it was reconstructed on this spot in 1959. The wide path now passes between a large sheepfold and a steep banking before taking the footbridge that crosses the beck, which flows from the confluence of Cranberry and Bull Cloughs. Almost immediately the way ahead divides and you take the path that turns east and into the Clough, to follow the stream chuckling away on your right. This path is called the Cut Gate track and is part of an ancient Bridleway,which was used to carry salt and other goods from Cheshire to the market towns of South Yorkshire. 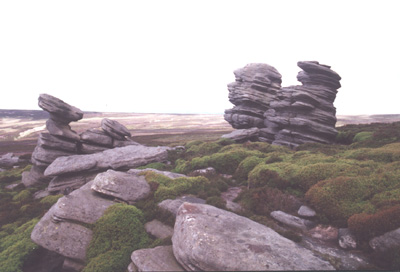 The path turns briefly into Bull Clough before rising easily onto the moor top with views of the Margery hill ridge, and the Bull Stones standing prominently to the North. Follow the track which is heading straight for the top of the ridge, until you draw level with a prominent stone cairn which marks the junction of a minor path that crosses from right to left in front of you. Turn North on this narrow path which follows the contour across the moor to the Bull Stones, which are now slightly below and behind you. On a clear day the views from the Bull Stones are excellent, with views of the Derwent reservoir to the south and as far as Bleaklow to the Northwest, with the rocky tors of Crow Stones to the North.

Leave the Bull Stones and head in the direction of Crow Stones, and you will soon pick up a narrow path in the heather that takes more or less a level course across the moor, soon arriving at the head of a deep Clough that drops into the main Derwent valley on your left. This is Broadhead Clough and is easily identified because of a series of grouse butts which are scattered about it's head, it is at this point that you need to watch out for the debris from the crash site. While you are still in the area of the grouse butts progress along the narrow path in the direction of Crow Stones, and keep looking slightly uphill to your right (East) As you drop into a stream, which crosses the path, the crash site can be seen up stream in the bed of the shallow gully, which forms the streambed.


The aircraft (Airspeed Consul TF-RPM) was on a delivery flight from Croydon to Iceland when it crashed into the hill on the morning of 12th April 1951 killing the three man crew on board at the time. The pilot was Pall Magnusson aged 26 from Sentiarnarnesi, Iceland and he was accompanied On this fateful flight by a wireless operator, Alexander Watson aged 42, an Englishman from Leytonstone, London, and a passenger Johann Rist aged 35 another Icelander. According to Ron Collier, the pilot had apparently opted to fly the aircraft using only visual means instead of using instruments, as he approached the Pennines in bad visibility he lost sight of the ground and ran into the hill under full power. As can be seen from the photos quite a lot of the debris is still on the ground including one of the Cheetah engines which has been stripped almost bare of it's cylinders. 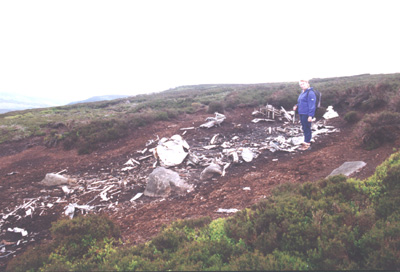 There is an area with a number of wooden crosses stuck into the ground and a small glass jar, which used to contain a poem. If you are like me, you will probably be leaving the site in a pensive mood, and you need to continue along the same path in the direction of Crow Stones Edge, which is reached in about ten minutes walk from the site.


The route that you take from here back to the turning circle will depend on your ability to navigate on open moorland, if you feel confident to find your way without the benefit of a path, stay with me, otherwise return to the lake the way you came. The rocks of Crow Stones edge mark the southern end of a gritstone outcrop with the weirdly shaped rocks of Crow Stones poised on its northern edge, and the tors of Rocking Stones situated below them.From the tors find a faint path heading north in the direction of Stainery Clough Head and follow this until you have passed the rocky ground on your left, and can easily turn onto a south westerly direction on pathless terrain. Keep on the level ground above, and parallel to the Clough, and you will come, without any difficulty to a narrow path leading steeply down to the confluence of the river Derwent and Stainery Clough, from here you take the wide, easy riverside path southwards back to the turning circle and the end of the walk.