Just some of the mysterious places to see in Yorkshire
Churn Milk Joan (NGR: SE020277)
One bright breezy morning early this year following a night of strong winds, I was making my way along the Calderdale Way above Mytholmroyd. As I approached the foot of the tall standing stone known as Churn Milk Joan I was surprised to find a large number of small coins scattered on the ground around the foot of the stone. After gathering the coins, I replaced them in a hollow set in the top of the pillar and sat to ponder on the many stories which proliferate about the origins of this imposing stone, which stands isolated at the edge of the moor.
Local folklore has it, that a milkmaid called Joan was carrying her milk across the moors from Luddenden to the hamlet of Pecket well, when she was caught in a fierce blizzard and froze to death at the spot. Her body was not found for several days and the stone was set up to commemorate the place where she met her death. Another local name for the stone, Churn Milk Peg is said to be the name of an old hag who was reputed to be the keeper of the nut groves which grew nearby. Her task was to prevent naughty children from collecting the nuts before they were ripened. 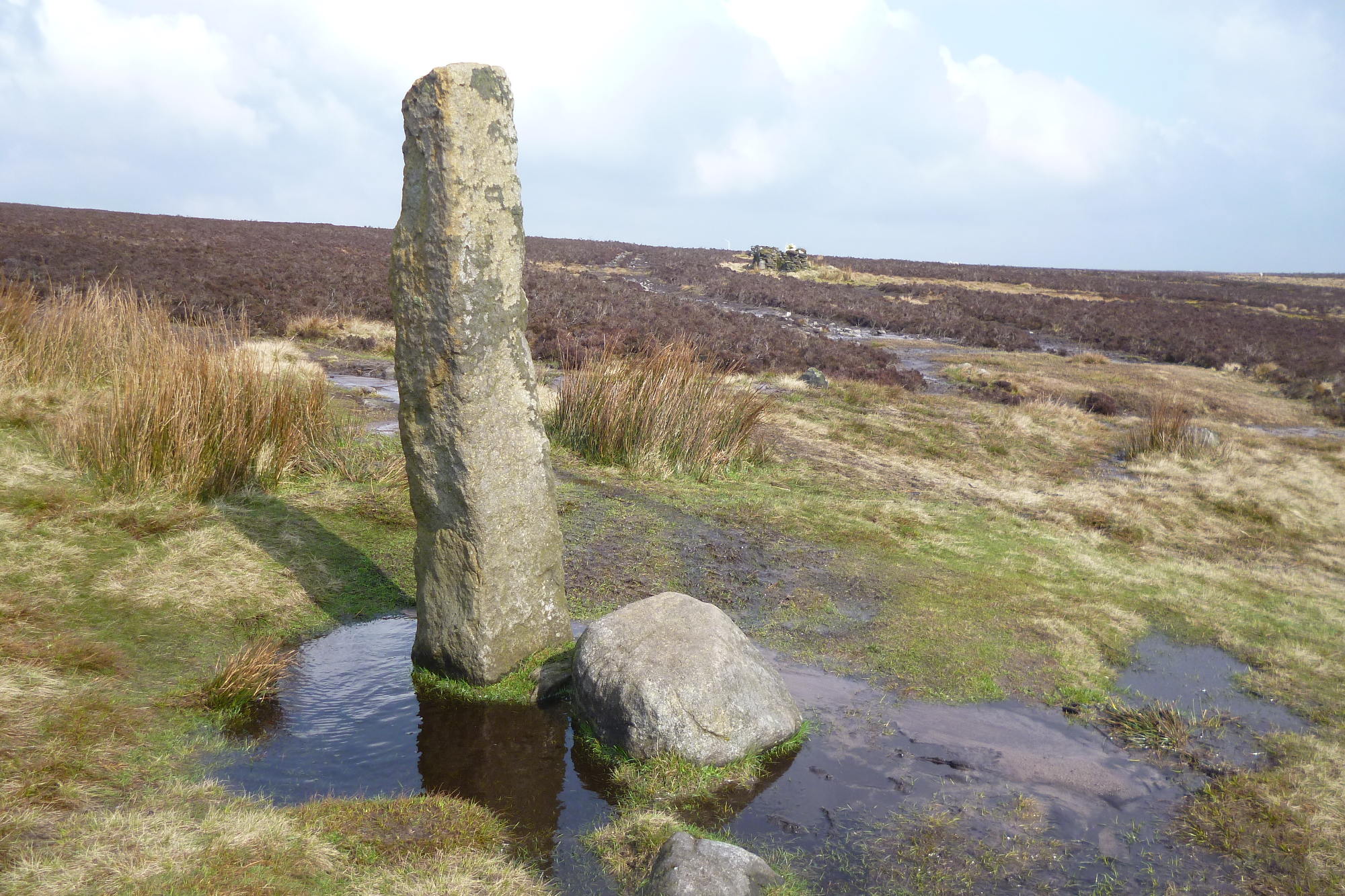 The story that I am familiar with is told in a poem by Ted Hughes who grew up in the valley below. He tells the story of farmers bringing their milk to the stone, where they would leave it for the cottagers living in the valley to collect. They in turn left their cash in the hollow in the stone’s crown and the farmers would leave their change. Hughes’ poem, Churn-Milk Joan, is included in his famous book with atmospheric photos by Fay Goodwin “Remains of Elmet”. The tradition of leaving coins in the hollow at the top of the stone is still observed by many ramblers.
The truth about the stone is more commonplace; parish boundary records inform us that the stone marks the intersection of the three boundaries of Sowerby, Hebden Royd and Wadsworth.
The Druids Temple Ilton (NGR: SE174787)
A rewarding circular walk from Leighton reservoir, near to Masham in North Yorkshire, could include a visit to Ilton Druid’s Temple. This realistic looking miniature Stonehenge was erected during the latter years of the 18th century by William Danby, High Sheriff of Yorkshire, who lived at nearby Swinton Hall and was the main landowner hereabouts. Squire Danby was a cultured man who had travelled extensively abroad. During his travels he became fascinated with the sect of the Druids, and upon his return to Yorkshire in 1790, partly as a scheme to provide work for the tenants on his Swinton estate; he resolved to construct a replica Druidical Temple. The folly, which is in the region of 100 feet long and roughly 50 feet wide, has some standing stones loftier than 10 feet high.
Danby offered a wage to any man who would live as a recluse at the Temple for seven years, not speaking with anyone and allowing his hair and beard to grow long. The story goes that one man attempted to live this hermit like existence, but after four and a half years he had to concede defeat.
In February 2008 it was reported that during the night of 29th a large number of the stones were uprooted and stolen, probably by someone who transported them by container to Russia to provide some rich businessman with an instant folly.
The Hitching Stone (NGR:  SD986417)
High on the moors above Cowling in West Yorkshire sits the Hitching stone.  Reputed to be the largest boulder in Yorkshire; the stone has a colourful and varied history. The stone, which is of glacial origin is a conspicuous landmark and as such has been used as a natural boundary marker for centuries. Not only do the township boundaries of Cowling, Sutton and Keighley meet here, the stone marks the boundary between the ancient counties of Yorkshire and Lancashire. A deep square cut niche has been carved in the western face into which one can climb with the help of a chain hanging from a bolt. This hole is known as the Druid’s or Priest’s Chair. When standing inside the niche and looking out towards the west, you are looking straight ahead at Pendle Hill and it is possible to watch the sun set behind the hill on the equinoxes.
Inside the hole is a strange circular tube which passes through the rock and exits low down on the external face of the boulder. During

certain wind conditions, when the wind is blowing across the outer mouth of the tube a low humming sound is created. I understand that Geologists believe the tube was caused by a fossilised tree which has since crumbled away.
Another interesting feature of the stone is a three feet deep square cut pool on top. It appears to me to have been man made, but for what purpose I could not say.
Local legend tells us that the stone was originally situated beside the abode of an old witch who lived on Ilkley Moor. This old crone took exception to the stone blocking her view and stuck her stick into the tube, hoisted the stone in the air and tossed it as a far she could from her home. The stone landed on Keighley Moor where it remains to this day. During the 19th century the boulder was the site of a Lammas Fair which is associated with the Harvest Festival, with horse races being held and other competitions.
Mick Melvin